A Day Out in Paris with Kids 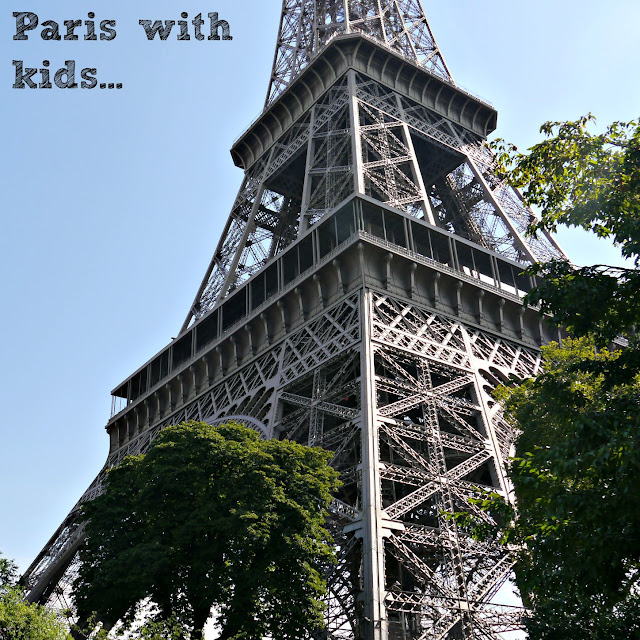 Whilst on holiday in France, we decided, that since we were only an hour from Paris, we would drive in and visit the sites. We had done a little preparation, we looked on the Time Out website at great places to visit with kids and knew we wanted to visit the Eiffel Tower, Arc Du Triomphe and the Jardin Du Luxembourg. If we could fit in any more sights then that would be a bonus.

My husband spoke with a friend who lives in Paris and he said that in August it would be ok to drive in and he was right. We set off about 8.15am and were in Paris for 9.15am, there was very little traffic even along the notorious Champs Elysee and we found a parking space easily in the Quai Branly Museum car park near the Eiffel Tower, it cost around £20 for the 12 hours parking, which for such a big city seemed reasonable and cheaper than getting a train. 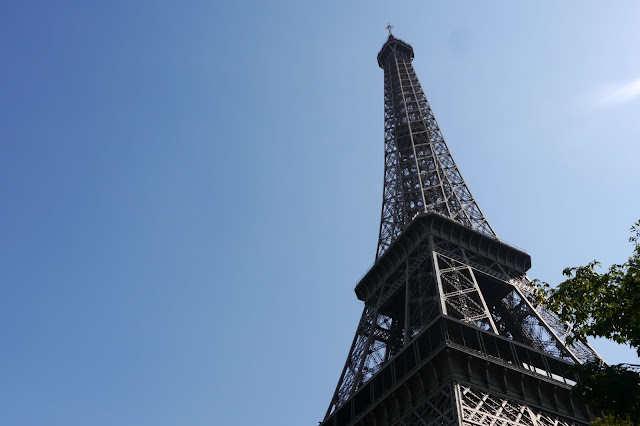 Top of our list was to see the Eiffel Tower, although we weren't going to go up it as we thought it would take too long and with only the day in Paris we didn't think we'd have time. However, when we got there, the queue went down quite quickly so we decided we would. We had intended to go all the way to the top but as we got to the front of the queue they stopped selling tickets for the top, so we only went to the second stage. If we had booked beforehand, not only would the queue have been quicker but we would have been able to go to the top with less trouble.

It was just €9 for adults and €4 for the children to the second stage so €26 which at the current exchange rate meant it was only £18 which is really good value for an attraction as big as the Eiffel Tower. The view from even the second stage was amazing so don't let it put you off if you can't go all the way to top. 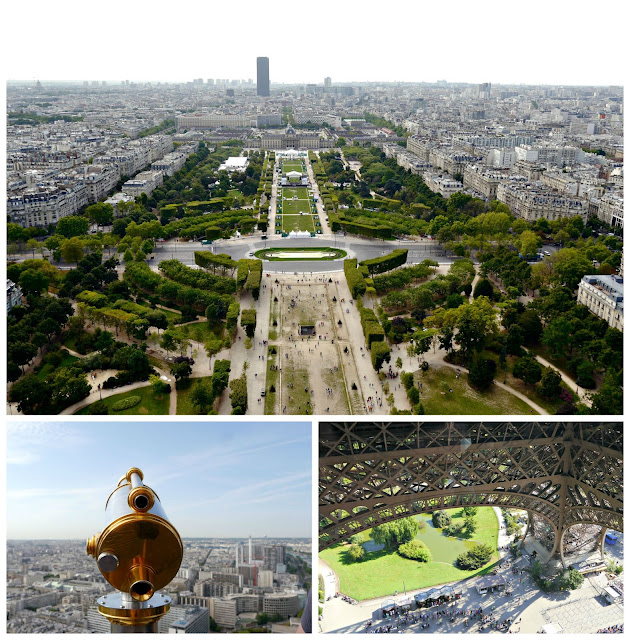 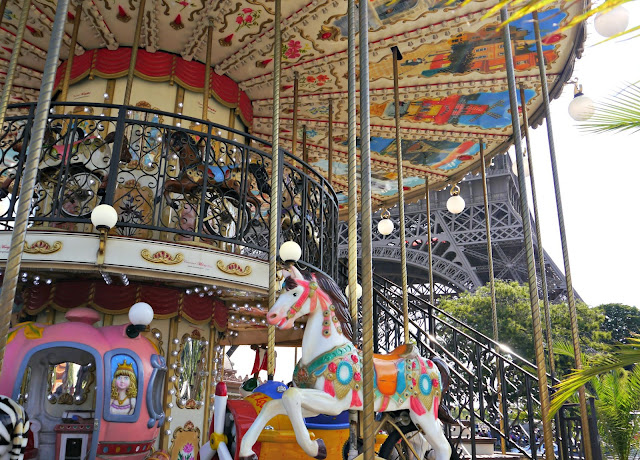 Afterwards, we decided that we would head to the Jardin Du Luxemberg as we'd seen some great information about sailing little wooden boats on the pond, the Metro that would have taken us there was closed and with two little pairs of legs and the weather being so warm we decided to get a Taxi there with a view to walking back. Using the Uber app, we got a ride about 15 minutes across town, it was a quick and easy way to get there, the driver was polite and offered us water and to help us in and out of the car, so well worth considering.

As it was almost lunchtime by this point we sat and ate ham and cheese crepes in the park, sitting in the shade was a welcome relief from the hot midday sun. Although they weren't cheap we hadn't expected anything less from being in Paris, even water is expensive. 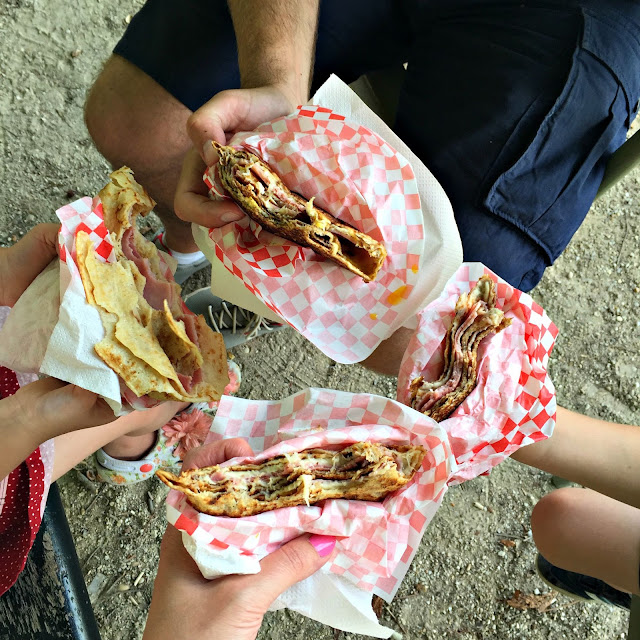 Afterwards, we headed to the pond, the children could see the little boats dotted around and were like moths to a flame and they found the lady who was hiring them out. It cost €3.50 for half an hour with the little boat which for how much excitement it generated and the disappointed sighs we encountered  when we had to give it back, I would say it was money well spent. You also get a stick to push the boat into the middle and then hopefully the wind takes it the rest of the way, there was a slight breeze which was great and it moved them along like little colourful ducks. 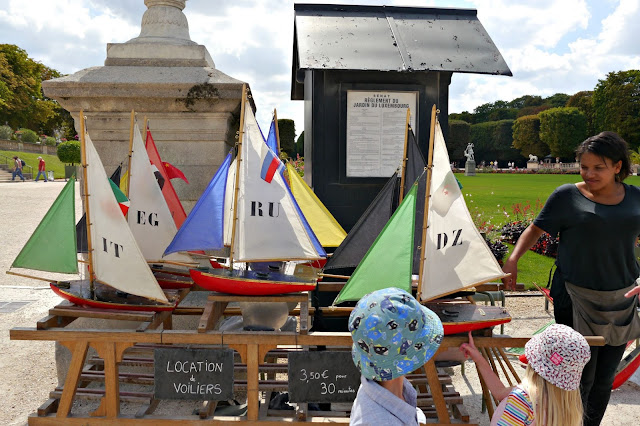 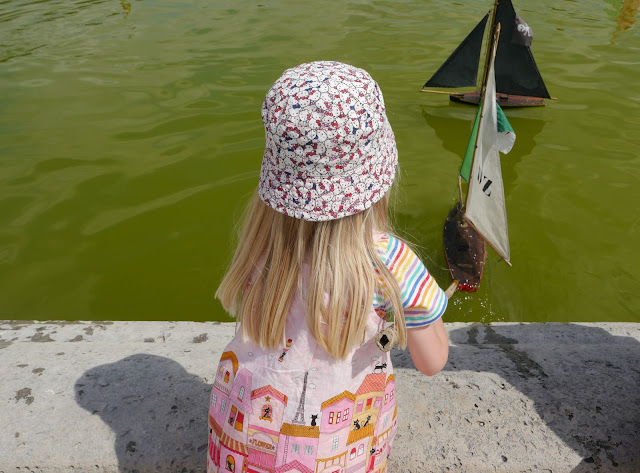 The adults and children alike enjoyed it and it gave us half an hour to collect our thoughts and enjoy the moment, we've never encountered anything like this before and I feel there are many missed opportunities for things like this in the UK. 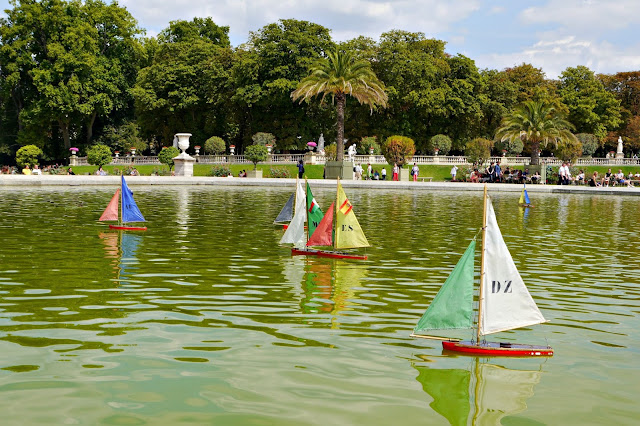 Once our thirty minutes were up, we headed towards the Cathedral Notre Dame, we had a lovely gelato from an amazing shop called Amorino, there were plenty of flavours to choose from and they even shape your ice cream into a flower. We carried on walking through the streets towards Notre Dame bustling with food outlets and restaurants, we stopped and had a cold drink and did some people watching. 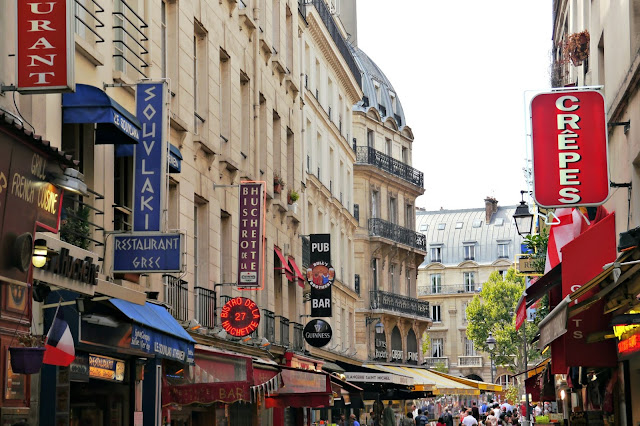 My son had started watching the Hunchback of Notre Dame that morning so knew where we were going and it made it all the more exciting having seen it in a Disney movie of course. Although the front is beautiful I now know after seeing another picture on Instagram that the back is actually equally, if not more beautiful and I wish we had been to see that side of it too.

The queues for the cathedral were really long and and again it came down to time, although i'm sure it is impressive we have visited many cathedrals in France now and they are all kind of the same on the inside. 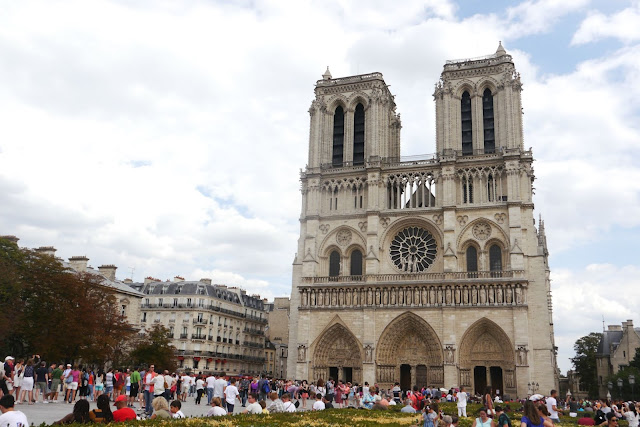 We took a slow walk down the Seine on our way to the Louvre, there are some wonderful little shops along the way and many beautiful building to be seen, small street sellers selling gifts and paintings as well as the obligatory cafes and bars that France do so well.

Walking through the Cour Carrée was impressive, the beautiful buildings are ornately carved and you could see the glass of the Louvre through the gates, it was impressive and certainly something to behold. I would have loved to have had the time to go in and see the Mona Lisa but probably
for the best as the children aren't quite at an age to enjoy such things, unless it's near the gift shop anyway. 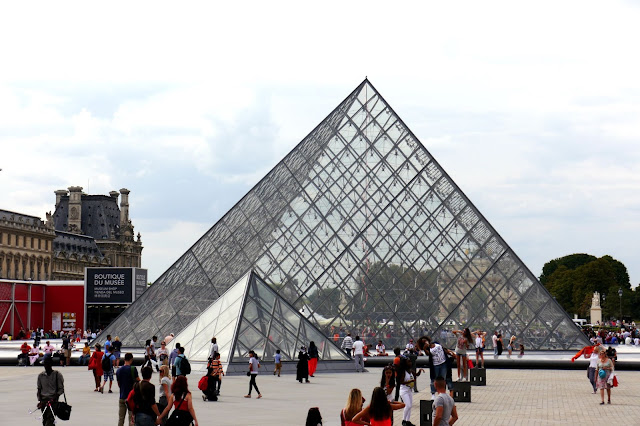 Afterwards we walked through the Jardin Des Tuileries which is between the Louvre and the Place Du Concorde, during the summer there is a fair on and the children both instantly spotted the large ferris wheel, we headed on over to have a look and it wasn't too expensive so a little bit tired from our walking we thought it would be a welcome rest, as well as give us another look above the beautiful buildings. It was well worth the money though and meant we could see the Eiffel Tower, Mon Martre and a different view of Paris to the one we'd had earlier.

After we got off we enjoyed some Barbe Au Papa (candy floss to you and me) we kept on walking up towards the Champs Elysee, legs were wary at this point and the children both did amazingly well to walk as far as they did. 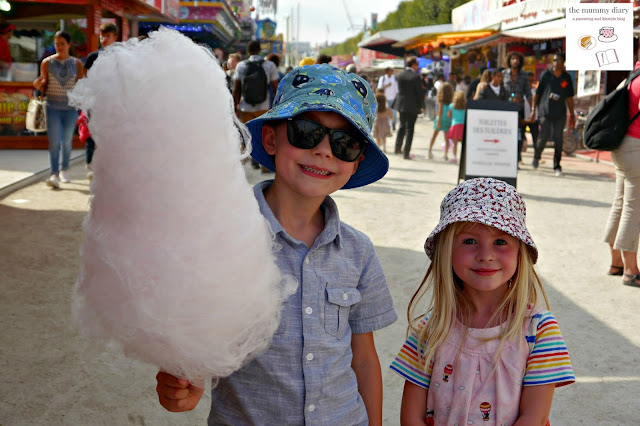 You could see the Arc Du Triomphe from the bottom of the road and as we got closer it's grandness only grew, I didn't realise you could walk to the top so when we drove round it later that evening it was amazing to see people stood on top, definitely one for next time we visit. It is an imposing feature and so beautiful stood in the Place de l'Etoile, a rather unbelievable piece of road that I couldn't help but close my eyes as hubby drove round it. 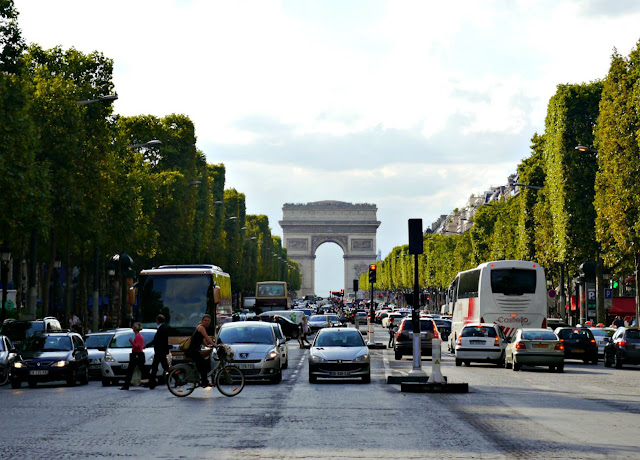 We'd found a restaurant that sounded nice from some reviews and headed that way but it was shut for refurbishment, typical! So we walked a bit further round the corner and found another one. The thing about Paris is there isn't a shortage of food places whatever your taste. After some food and a well earned rest we headed back to the car, 12 hours of pretty much solid walking round had tired everyone out and so we were all ready for home.

There is so much more to see in Paris so I have no doubt we will be back, if you are visiting and have a few days then you could also visit the Natural History Museum, the Pompidou Centre which is a building turned inside out, Sacre Coure which is on top of Montmartre Hill and has amazing views of Paris as well as the Paris Catacombs for older children.

It was without a doubt the highlight of my holiday, so many memoirs made in one day as well as for me ticking one thing off my bucket list, i'd love to go back though and it has made me hungry to visit other cities around Europe. 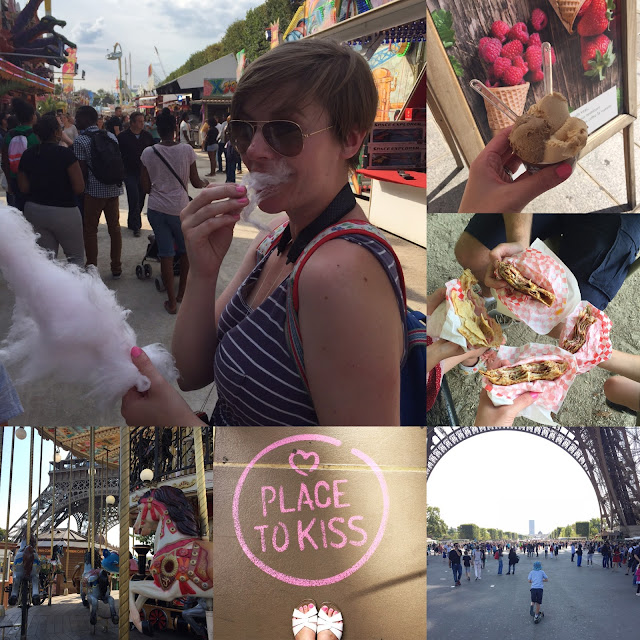