on September 16, 2015
We were sent some children's activities from Boswells of Oxford to give a try whilst on holiday, but to be honest these items are great no matter where you are travelling and are useful for when you are out and about in restaurants too. 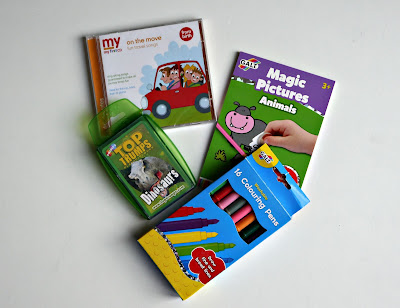 We were sent some Dinosaur Top Trumps which we did already have but I have no idea where they are and were great for my son, he didn't stop playing with them the whole two weeks and they not only kept him occupied but helped him with numbers and his reading too.

We were also sent a fabulous magic picture colouring book, which isn't just any ordinary colouring book but instead you have to use a coin to rub over the blank page to reveal the picture, included were some really bright and easy to grip felt tips which meant my daughter could be kept occupied colouring in once she had revealed the picture using the coin. 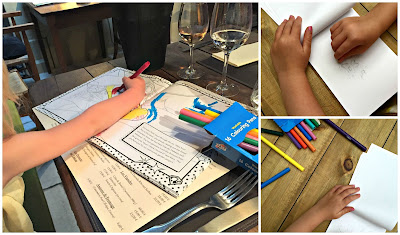 Along with these bits, they also included a sing a long CD, I feel our children were a little old for this and as awful as this makes us sound we have never listened to children's CDs in the car. It does mean our children have inherited our great taste in music though.

The CD does however have some classic songs, which, if you are into this sort of thing would make for a great ride along treat.

Having things to do in the car or when you are out and about are always a must for us, these are all relatively small but exciting things which makes them great for just popping in your bag when you are heading out.

NB: We were sent these items for the purpose of this post, all words and opinions are my own.
boswellsofoxford children colouring daysout dinosaurs galt out and about review things to do top trumps toys travel